Black Lives Matter and the imperative to transform museums

As museum professionals, we like to imagine that our institutions are held high in regard as “trusted tellers of truth” in the societies we serve. We hope for our visitors to leave with a greater understanding and appreciation of the subjects addressed within the museum walls than they had when they arrived.

We want people to turn to museums to help them make sense of not only times past, but also the current moment, in those times when it becomes apparent that history is being made now. These are times when—as individuals, communities, institutions and nations—those of us who have become accustomed to telling history’s stories are challenged so profoundly that the very foundations upon which our worldview has been constructed are shaken to the core. In such times, those of us with a conscience feel compelled to shift ground or else be left floundering in uncertainty and despair.

Such moments leave many profoundly unsettled and can cause special difficulty for those museum professionals who, accustomed to defining a narrative of how things were, are now compelled to change our understanding of how things actually are, and how they could or even should be understood in the future. We may even find ourselves challenged by the very actors in these events who assert the right to also be the recorders and interpreters of their own motivations and actions, and even their consequences. Even more confusing is the realization that we no longer are being given licence to forge a narrative that leaves out those bits that may reflect badly on, or cause discomfort to, ourselves, or a group to which we belong. It may well come as a shock, a bitter pill to swallow, when we feel denied what we have long regarded as our right as curators of everyone’s (hi)story.

Now is such a moment.

The now-infamous image of George Floyd, unable to breathe, pinned to the ground under Derek Chauvin’s knee until his life was crushed out of him has sent shock waves around the world. With his agonizing last words, George Floyd’s “I can’t breathe!” has become the rallying cry of many Black people, first in the USA, then across Canada and around the world: an assertion that every Black person is of consequence, that BLACK LIVES MATTER. They must matter to all who claim respect humanity, who love truth, and who seek to live in justice and peace with others. 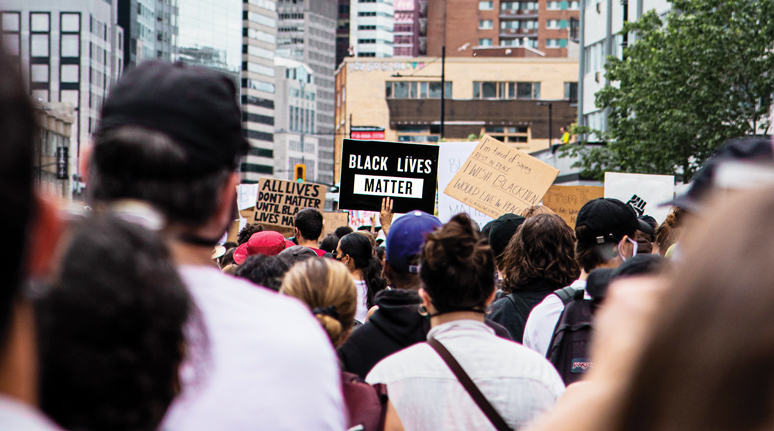 Seven years have passed since July 13, 2013, when George Zimmerman was acquitted of the murder of 17-year-old Trayvon Martin and the hashtag #BlackLivesMatter first ignited what would become a global movement. Yet on May 25, 2020, the day of George Floyd’s killing, many of us who enjoy privilege by “virtue” of race still claimed ignorance of the ubiquitous nature of Black people’s experience of systemic racism. Such privileged protestations of innocence were brutally exposed in those eight minutes and forty-six seconds into which the long history of systemic racism, oppression and suffering was so viscerally condensed for those of us who had failed to listen before — listen to Trayvon Martin, and to Eric Garner, Michael Brown, Tamir Rice, Sandra Bland, Korryn Gaines and so many more.

I cannot count how many more Black lives were lost to police violence between Trayvon Martin and George Floyd, before white people started to pay attention in meaningful numbers worldwide. Why did it take those eight minutes and forty-six seconds to wake so many of us up to the reality of institutional violence, where for decades we have not questioned the numerous privileges we have come to regard as our right? In the time it took to take George Floyd’s life, even those who would regard themselves as ‘non racist’ began to realize how little we really know about being Black in a world in which Black lives are regarded as being of little or no consequence.

For white people, the shocking realization, and sometimes reluctant acknowledgment, that our unquestioned sense of privilege keeps us ignorant to the breadth and depth of systemic racism and institutionalized violence against people do not look like us puts us on the defensive. But this is also the precise moment that allows an opening to such understanding, and to refuse to learn from it is to cling to and perpetuate the racism and delusion of superiority so deeply embedded in our psyches and systems.

Among the purposes we serve, museums record, research and curate moments in history that have influenced society in one way or another, for good and for ill. Inasmuch as museums are created, controlled and largely serviced by those who have benefitted the most from the injustices embedded in the very histories they narrate, they are also instruments through which those benefits are preserved in the present and for the future.

The Black Lives Matter movement is history in the making, and our museums must respond. Will we? Will anything we do make a real and lasting difference, or bring about the change that professionals within our museums who are Black, Indigenous and people of colour are rightfully demanding?

Neil Alan Barclay, president and CEO of the Charles H. Wright Museum of African American History, was recently quoted saying: “I think we have a critical role to play …We’ve seen plans of diversity and inclusion before, but we haven’t seen a lot of change and that’s what this moment certainly brings to mind for me—how little has changed.”

If bringing about real change is challenging to a leading Black museum CEO such as Neil Alan Barclay, how much more so the challenge to museums led by white CEOs, however well-intentioned, who struggle to recognize and acknowledge the presence of systemic racism within our own institutions?

We have to begin by acknowledging that our museums are impoverished by lack of representation and diversity at just about every institutional and functional level. Not only does this limit the richness of our offering, it causes great pain to those who are excluded, as well as those whose contributions are rejected or diminished. I realize that the pain is almost always one-sided, hardly ever shared or even acknowledged.

Rather than resenting this challenge to the status quo, I must acknowledge the paradox that what is required of me is to share in the anguish that my BIPOC colleagues have had to bear inequitably — and yet, because of my own lived experience, I cannot ever truly do so. I must understand that when I am confronted with the harm I have inflicted on another through my — even unwitting — participation in white supremacy, it is not an attack on me, but a gift: a generous act of trust and an invitation to do and be better.

We are not adversaries: we are all professionals seeking to deliver the best we can in a field of endeavor that we all love and wish to share with everyone who comes to our museums. But the uncomfortable truth, as stated by Jasmine Wahi, the Bronx Museum’s social justice curator, remains: “Our systems are built on inequity and a valuation of wealth and whiteness over genuine creative talent.”

The BLM movement is here to stay. It must be accompanied by a seismic shift in acknowledging and addressing systemic racism as a pre-existent condition prevalent in every aspect of institutional life, including arts and culture. It is almost as if the isolation forced upon us by the COVID-19 pandemic has created the much-needed space for difficult and frank conversations. The cry of “I can’t breathe,” a cry repeated over years by Eric Garner, Javier Ambler, Manuel Ellis, Elijah McCain and finally, heard round the world, by George Floyd, has given us the power to express — to exhale—what has been held in for too long.

We have to acknowledge that even the best of our intentions to address inequities in our museums have fallen short of what is required at this painful, historic moment that is not going to go away.

Museums are products of colonization. We must address this legacy fully and face on. This will require humility and courage. In the words of Yvette Mutumba, the recently appointed curator-at-large at the Stedelijk Museum in Amsterdam, when asked what decolonization of museums would entail:

It means having to sit with that discomfort. It means understanding that decolonization is not a matter of “us” and “them,” but concerns all. It means recognizing that BIPOC/BAME/POC are not necessarily particularly “political”; we simply do not have the choice to not be political. It means admitting that having grown up in a racist structure is no excuse.

There is today constant reference to a “new normal” as a result of the COVID-19 pandemic. Weeks, even months of lockdown have given us time, as individuals and institutions, to reflect upon and practice a different way of relating and of being in community and society at large. The death of George Floyd has, in not dissimilar fashion, caused many around the world to reflect upon our mostly unexamined presumptions and assumptions about race and power. We can no longer get away with changes that are little more than cosmetic or temporary—the occasional inclusion of “non-white” narratives, token board and staff appointments, and even such expansive acts such as repatriation. Although necessary, these are not in themselves sufficient.

I am not seeking to appease, but to recognize the legitimate aspirations, indeed, rights of those communities historically denied equal and full access to speak and be heard, to meaningful self-expression, and to the power to make decisions and influence direction. To create something different and new.

Let us not one day look back at this moment and regret the opportunity we were given, but did not accept, to recreate our cultural institutions as agents of healing and wholeness, to make reparation for the abuses of the past. As history is being made by the BLM movement, it is only right that what is being expressed in words and actions by those who are actually affected by systemic racism and violence be recorded and interpreted by those professionals within our institutions themselves in real time.

Today, as we look back, we would do well to remember the role played by museums in the past—particularly those ethnology and anthropology museums that supported and perpetuated false theories of racial superiority and inferiority. The silence around this unsavory truth is at last being broken. White supremacy has conditioned white ears to be uncomfortable with the voices of BIPOC professionals and communities. We may instinctually wish to dismiss them as strident, loud or angry. This is our cue to slow down and listen respectfully. Such conversations may be extremely uncomfortable, but they must not be avoided.

This a unique moment in which museums are being called not just to record and interpret history, but to make it. We have an opportunity now to transform our structures and become truly representative in our staffing, governance and community engagement. But this will only be a start to what could be created by truly respecting and acknowledging the worth of colleagues whose contribution to the museums of this and every nation truly matters. M

Of Polish origin, Jack Lohman is the President of the CMA’s Board of Directors and CEO of the Royal British Columbia Museum. He is also a board member of the City of Warsaw Museum, the Adam Mickiewicz Institute and the European Museum Academy. He received the Bene Merito Medal from the Republic of Poland in 2011 for services to museums and a CBE in the Queen’s Birthday Honours in 2012 for his work with museums around the world.