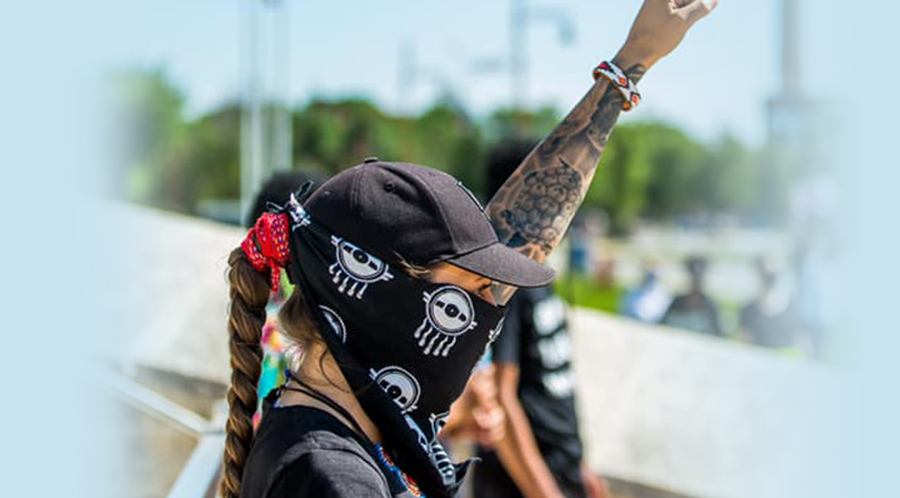 Canada’s Institutional Racism Problem is Also Embedded in Its Museums — How Can We Address It?

There seems to be a moment of reckoning on institutional racism in Canada that is taking place across several sectors. On June 5th 2020, Breonna Taylor’s birthday, a rally organized by #Justice4BlackLives in Winnipeg saw thousands of people march from the Manitoba Legislature to the Canadian Museum for Human Rights (CMHR). During a radio interview with CBC Manitoba, Nampande Londe, a Black Canadian woman who was present, explained that a lot of non-Black people thought of this march as a form of solidarity with the protests in the United States, “as if this wasn’t a problem that also exists here in Canada.” As a reaction, she created the #ItHappensInWinnipeg social media campaign for Black people to share their stories and to serve as a record that “racism is alive and well here in Canada.”

On June 7th, Thiané Diop, former Program Interpreter at the CMHR, shared her own story of anti-Black racism at the institution using Londe’s #ItHappensInWinnipeg. This prompted other current and former Black employees at the CMHR to do the same. Diop then created #CMHRStopLying, encouraging other Black, Indigenous and People of Colour (BIPOC) to share their experiences of racism and to hold the museum accountable. The CMHR responded with a public statement that appeared disingenuous to many, prompting dozens of past and present employees to come forward with their experiences using #CMHRStopLying. As the only curator from a visible minority ever hired by the museum, I shared too. The personal accounts of racism, homophobia, and sexual harassment that employees were exposed to under the museum’s overwhelming white leadership produced a persistent media frenzy that lasted several weeks. These narratives also forced the museum to acknowledge some of its wrongdoings and launch an independent investigation and forced the CEO to step down. These small steps are part of a long process of rebuilding trust with the many communities affected by the museum’s actions. 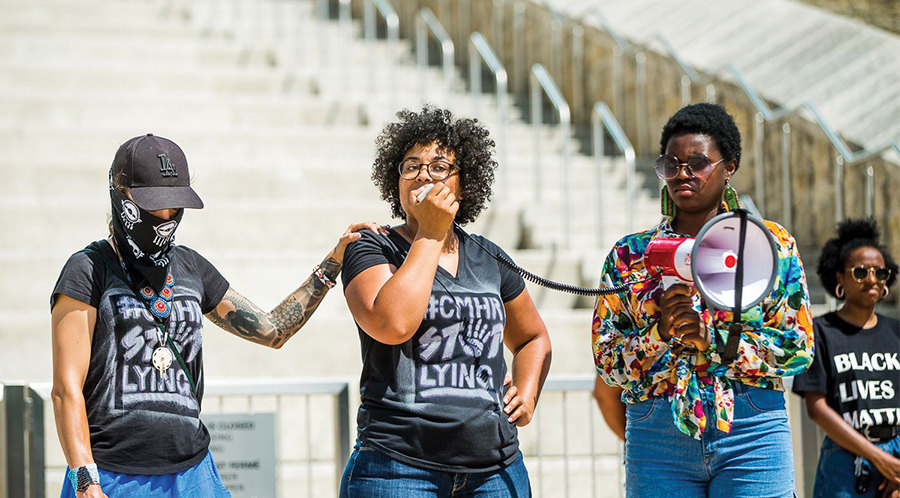 #CMHRStopLying members Julie White and Thiané Diop next to Nampande Londe, founder of #ithappensinwinnipeg, and Mahlet Cuff, a member of @Justice4BlackLivesWinnipeg, while speaking at a protest in front of the Canadian Museum for Human Rights on June 28th 2020. Photo — Travis Ross

Institutional racism and the upholding of white supremacy is not an issue exclusive to the CMHR. It is a structural problem that is pervasive in the museum sector across the country. Museums and universities, some of the whitest institutions in the western world, have been tools in the maintenance and dissemination of colonial thought. BIPOC individuals working and studying in Canadian museums and universities know this firsthand and have started to speak publicly about their experiences. In early June, Rea MacNamara, who oversaw public programming initiatives at the Gardiner Museum in Toronto, wrote an open letter discussing the institutional racism she experienced and witnessed while working there. In mid-June, Devyani Saltzman, Director of Public Programming at the Art Gallery of Ontario (AGO) wrote a piece where she spoke about the physical pain experienced by BIPOC individuals in the cultural sector trying to reflect the community while also “not being too political.” This was followed by a powerful article by visual artist, community activist, scholar and member of Black Lives Matter Toronto, Syrus Marcus Ware. Here, he not only recounts his experiences of anti-Black racism while working at the AGO, but also challenges art institutions in Canada to end it. At the end of June, Indigenous women Paulina Johnson, Judy Half, and Miranda Jimmy, who were involved under different capacities with the Royal Alberta Museum, spoke about both institutional racism and individual instances of racism they experienced there. Additionally, in an interview at the end of June for the Institute for Canadian Citizenship, the student-run organization Museum Professionals of Colour (MPOC) at the University of Toronto, spoke about their work aimed at remediating “emphatically white and Eurocentric” curricula and academic staff within the Master of Museum Studies.

Why are these issues so widespread in the museum sector in this country? Why are BIPOC vilified, reprimanded, and paying the consequences when they speak out? In her CBC interview, Londe states that some people believe that racism is a question of ignorance; she argues that racism is a matter of “willful blindness”. In Canada, the museum sector has deliberately chosen to ignore the prevalence of systemic racism and to actively uphold the status quo. As Sean O’Neill points out in a piece published end of June 2020, “there is a crisis of whiteness” in the sector. The study, conducted on the four largest art museums in the country, found that all museum’s directors and all board presidents are white, and all but one of the senior executives are also white. The day after the study was published, the Vancouver Art Gallery announced the hiring of a new white CEO. Discouragingly, there seems to be no intention of addressing the crisis in the museum sector in Canada. 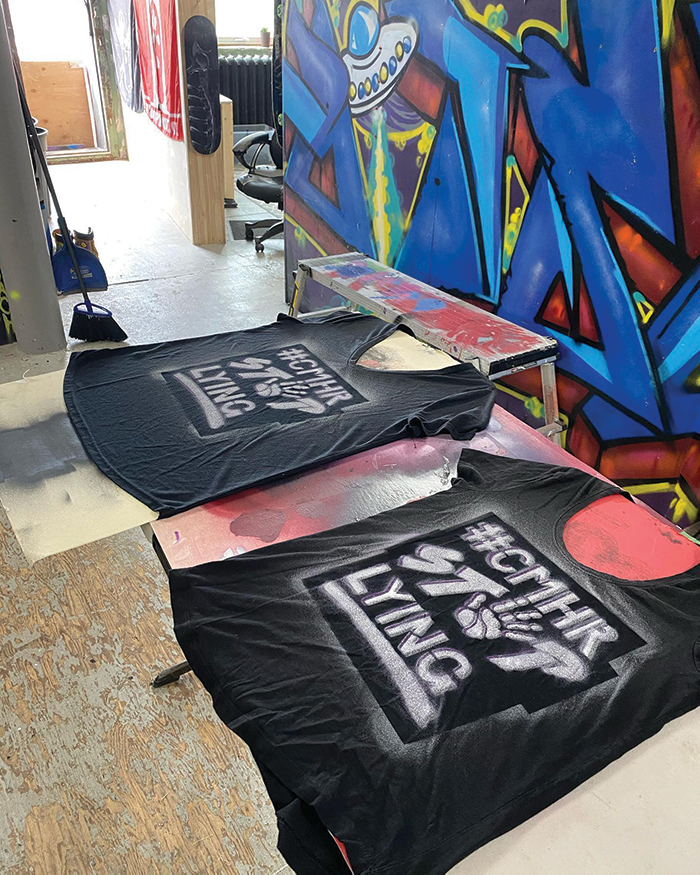 In 2017, Michael Maranda published a similar study on Canadian art galleries where he found that out of 184 senior positions, 92% were occupied by white people, less than 4% by Indigenous people, and just more than 4% by visible minorities. No specific data was collected regarding how many were/identified as Black. This study focused exclusively on art galleries that receive public funding. These numbers are all the more shocking when compared to the figures from the 2016 Canadian census, where 7,674,580 people — or 22.3% — identified as belonging to the visible minority category. A 2018 study commissioned by the Canadian Parliament titled, “Moving Forward — Towards a Stronger Museum Sector,” actively encourages museums to increase their diversity so that all Canadians can see themselves represented in the sector. Given the recent outpouring of BIPOC people sharing their experiences, it is clear that there remains a major disconnect between this recommendation and its implementation.

What can institutions in our sector do to address this crisis?

We, as a sector, need to recognize the need for a comprehensive study on the lack of diversity in leadership positions across all museums in Canada. We need to have a benchmark from where we can start to measure the progress made along the way. Currently, there are no academic studies on the subject that critically and systematically examine the implications of an overwhelming white leadership and the lack of BIPOC representation in decision-making positions in the museum sector in Canada. Not prioritizing the inclusion of BIPOC perspectives and talent in leadership roles allows the white supremacy embedded in museums to go unchallenged. This preservation of the status quo furthers tokenistic, victimizing, and stereotypical views of BIPOC communities in museum content while also exposing BIPOC employees to racial violence inside these institutions.

Grounding museum practice in anti-oppression, human rights, and other social justice frameworks would help museums embody values they already claim to implement, but are not living up to. This means anchoring respect for human dignity, non-discrimination, equity, participation, and inclusion at the heart of their work. Empowering members from historically excluded communities to participate in policy formulation would contribute to holding cultural institutions accountable and to promoting project sustainability. Meaningful BIPOC leadership and community participation means ensuring genuine ownership and control over all museum processes in all phases of a project: assessment, analysis, planning, implementation, monitoring, and evaluation. This meaningful participation must also be accompanied by a commitment of fair pay for BIPOC individuals’ time and expertise. Museums cannot continue to extract content and knowledge from BIPOC employees and communities without adequately compensating them for their work. Content reviews of museum exhibitions and programs are also necessary for museums to address institutional racism and their complicity in perpetuating anti-Blackness; these must also be led and carried out by BIPOC employees and communities.

Developing ethical guidelines in partnership with BIPOC communities to help museums address institutional racism must be a priority for institutions wanting to become more transparent, democratic, and accountable. For instance, while I was working in Sweden developing a vision for a new national museum on migration and democracy, the Museum of Movements (MoM), I used a human rights-based approach and other participatory methodologies to ground the museum’s practice. A human rights-based approach promotes the sustainability of projects and the empowerment of people — especially the historically excluded — to participate in policy formulation while also holding cultural institutions accountable. My work included developing ethical guidelines to facilitate BIPOC inclusion and to address the institutional racism embedded in museums. This complemented my work as a member of ICOM’s International Committee on Ethical Dilemmas. In the fall of 2019, I led an ethics workshop that brought to Sweden 35 experts from three different sectors: community, academia, and museums. These experts also belonged to and worked with historically marginalized communities around oral history, community participation, and ethics. And they represented the MoM’s neighbourhood, the city of Malmo, Sweden, and countries spanning five different continents. They shared their knowledge and experiences over three days, resulting in the first draft of the ethical guidelines that will guide MoM’s work. Museums in Canada wanting to address institutional racism could benefit from the adoption of similar models of policy development helmed by BIPOC staff.

While there is an obvious and pressing need for museums to include more diverse leadership to better reflect the communities they work with, they also need to provide their current staff with adequate training to properly conduct their work. Anti-oppression and human rights training would help museum staff identify their implicit biases and how their actions can further alienate BIPOC colleagues and those communities with whom they are working. This would also empower employees to help tackle structural racism within their institutions. Adequate training would encourage critical self-reflection on privilege, implicit bias, and institutional racism. This in turn would enable museum leadership to foster an environment open to critical thinking where such discussions are welcome rather than penalized.

Calls to hire BIPOC leaders are often dismissed by arguing that there are not enough BIPOC candidates with the “right skills.” The recent coverage of the anti-racism movement in the sector led by BIPOC museum professionals proves the opposite. In fact, there are BIPOC individuals working across the country who rarely get the opportunity to grow in their careers or have access to leadership positions. Clear pathways for their advancement must be made available by museums. Human resources must be proactive and adapt their hiring processes to attract BIPOC talent. Expertise in different areas, such as community organizing, human rights, and activism must become sought-after skills in the recruitment process. The lived experiences that BIPOC individuals bring to the table must be valued as much as museums value academic expertise or corporate acumen. Museums would also benefit from involving community organizers in their hiring practices to help them identify suitable candidates within communities who possess non-traditional but needed skills to help them succeed in the profession.

Will this moment of reckoning on institutional racism last? Or, will the museum sector quietly go back to upholding the status quo? It is time for those who have held the power in the sector for far too long to start listening to new perspectives and to make the necessary changes for museums to redress past wrongs and truly reflect the society they intend to serve. For a long time, many of us BIPOC museum professionals have felt isolated in our work dismantling a system that oppresses us and continues to uphold the status quo. But, if something has become clear during this historic moment, it is that we are not alone. We are here, we exist, and we are not going away. M

Armando Perla is Head of Human Rights at the Montreal Holocaust Museum. He is also International Advisor on Museums, Human Rights and Social Inclusion for the City of Medellin in Colombia. Armando was a founding team member for the Canadian Museum for Human Rights in Winnipeg and the Swedish Museum of Migration and Democracy in Malmo. He is also a board member of ICOM’s International Committee on Ethical Dilemmas.